Leather Goddesses of Phobos was one of the most suggestive text adventure games ever developed. The sarcasm-rich sci-fi parody allowed gamers to choose their genders and interact with other characters within the game. The game is known for its different levels. You can choose one from three naughtiness levels ranging from "family-friendly" to "lewd" (sexually explicit). With a sizable vocabulary and plenty of locations, the game tests a player's logic by offering several puzzles.

Leather Goddesses of Phobos was one of the few games that offered freebies. These free stuff included a scratch and sniff card, a 3D comic book, 3D glasses and a map. These "feelies" added more variety to the game as they offered hints to the player. For example the scratch and sniff card was useful for gamers who would scratch a numbered area in the card and take a whiff as per the game's directions and would enter the name of the flavor. 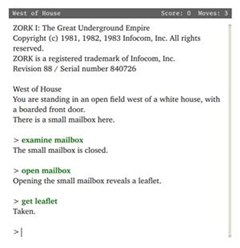 Zork was one of the very first text adventure games. The name was changed from Dungeons to Zork soon after the developers were slapped with a trademarks violation notice by the publisher of D&D. The fantasy game has a very Indiana Jones type of a setting. A "nameless adventurer" embarks on an adventure to the "ruins of an ancient empire" filled with exotic creatures, monsters, treasures and traps.

Hitch Hikers Guide to the Galaxy

Loosely based on the most popular sci-fi novels of all time, The Hitch Hikers Guide to the Galaxy is one of the most played text adventure games of all time (yes, many adventure gamers still love to revisit the virtual Heart of Gold). Like the Leather Goddesses of Phobos game, Hitch Hikers also offered plenty of bonus content, though not as "attractive" as the former. Items such as "pocket fluff" (cotton ball), an empty plastic bag called the Microscopic Space Fleet were some of the freebies offered. You can expect such fun stuff, given the game's premise.

Want to master Microsoft Excel and take your work-from-home job prospects to the next level? Jump-start your career with our Premium A-to-Z Microsoft Excel Training Bundle from the new Gadget Hacks Shop and get lifetime access to more than 40 hours of Basic to Advanced instruction on functions, formula, tools, and more.

Other worthwhile deals to check out:

Join the Next Reality AR Community

Get the latest in AR — delivered straight to your inbox.